Future Gazing rarely results in an accurate prediction of the future, but sometimes results in some predictions being fairly close to developments that do occur within the predicted time frames. Some companies, and Governments pay experts a significant sum of money to do nothing other than make predictions of what the future is going to look like. This enables them to direct research (so in some senses can become self enabling) and try to gauge what products will sell the best in the future, gaining a jump on their rivals.

It is fairly easy to look at today's trends and simply extrapolate them, especially in the short to medium term, but this will miss any disruptive changes that might occur. Predicting when and what a 'disruptive' change might be is far far harder. This is why when we look back at future predictions made in the past, they all look rather 'quaint' and 'of the period' - for instance predictions made in the 1920s of life in the 21st Century tend to extrapolate the fashions and technology of the 1920s, so aircraft are just bigger versions of the bi-plane etc. Like this image of a future New York from 1925. 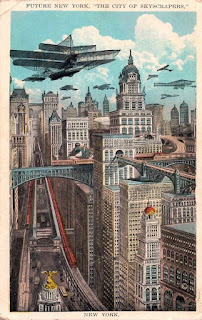 Sometimes though, predictions can be pretty much spot on, as with this image of 'education via television' from the 1930s accurately predicting the Open University televised courses of the 1970s 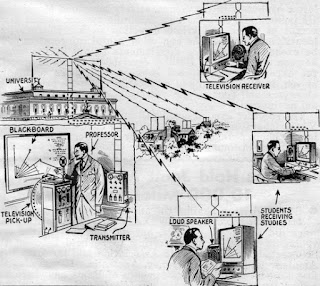 Though this shows the TV technology of the 1930s, not what would actually be available in the 1970s.

So this look at life in the UK in 2030 is just a bit of fun rather than anything that is likely to be particularly accurate, though it will be fun to look back at this in 13 years time.

There are a number of potentially highly disruptive technologies already working in the lab, or about to be demonstrated in tests, it is not unreasonable to assume that some of these at least will have made it to market by 2030. Some, like the 'smart phone' may be so successful that uptake is rapid and that by 2030 they are in common use, others may seem like good ideas now, but fail for one reason or another and thus have all but vanished by 2030.


This is an area where in the next 5-10 years we are likely to see fundamental changes in how we get from A to B which will in turn have a potentially huge knock on effect on the way we live.

Self-Drive cars - Most manufacturers are already producing cars that can park themselves and provide increasing levels of 'driver assist' to the extent that most can already effectively drive themselves, but we are a few years away yet from true self drive cars where we will be a passenger, rather than have any control of the driving. By 2030 though it is reasonable to assume that the self drive cars will have begun to substantially replace non self drive vehicles. It is likely that motorways will be limited to self drive vehicles only, and potentially all 'high speed' roads will become self-drive only by 2030. Car ownership is likely to drop substantially, this will have a huge impact on the planning of new housing and towns. We won't need garages or drive-ways if we don't own cars, nor will we have our roads clogged up with parked vehicles. When we need to use a car, we'll 'hail' one on whatever passes for an 'app' on whatever passes for a connected device in 2030. The nearest available vehicle will then arrive at our door within a few minutes ready to take us wherever we want to go. This means housing areas and town centres will likely become far more pedestrianized and generally nicer places to be, though there will be a need for potentially large 'waiting areas' on the outskirts of towns and smaller ones outside of villages where empty cars can wait to be called, and re-charge whilst doing so.

Long distance travel by 'car' is likely to be much reduced as well. If the upcoming Hyperloop test track proves successful, it is likely that by 2030 there will be Hyperloop lines between most major cities in the UK. They will be cheap and rapid to build compared with traditional railways or roads, and they will prove extremely cheap to run, so fares will be substantially less than for existing travel. It will be possible to travel from London to Manchester in 15 minutes with self-drive pods delivering you from your door to the hyperloop terminal at one end and the terminal to your end destination at the other. Traffic jams will become a thing of the past, and future generations will marvel that we used to spend so much of our lives sat in slow moving traffic. Speeds will increase as the technology is proven, and may even replace long distance air travel eventually, though only on routes over land. 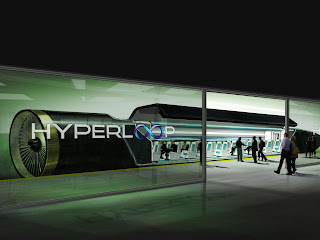 That's it for part one - in further parts we'll look at work, society, leisure and communications.