We've finally added all our t-shirt designs, as unveiled at Collectormania just over a week ago, to our online store. Apologies for the slight delay.

So now we have our initial 'collection' with tees inspired by gaming, tv shows, movies and popular culture. We have slogans, we have logos, we have creative designs.

All our designs feature original and exclusive artwork, either our own designs or licensed from an artist/designer we love (House of Wonderland) - eventually we'll be looking at incorporating artwork from some other artists we admire.

We're already working on some new designs which we hope to have ready for the London Film & Comic Con in a few weeks, then we'll be adding new designs on a fairly regular basis and dropping those designs which are least popular. So if you see something you like, don't wait too long to buy it as it.

Our online prices are currently fixed and are fully inclusive of UK postage and packing. We usually then sell at a discount/promotional price at cons/events as there is no p&p to worry about. These are just a few of our designs - for the full, current range please do drop by our store 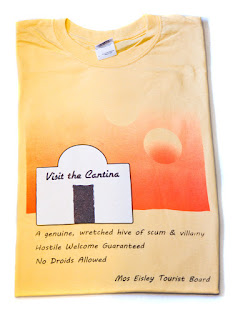 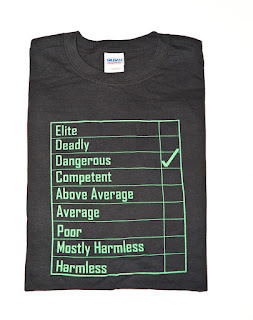 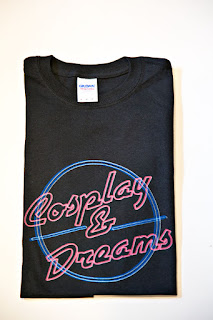 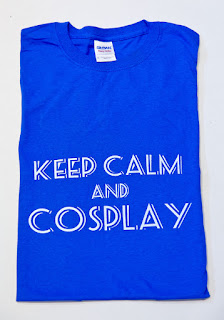 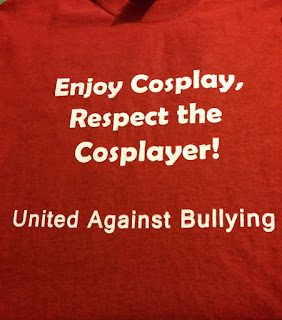 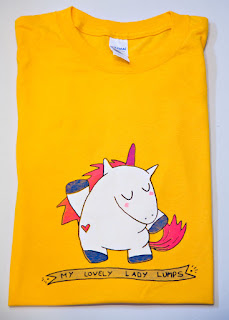 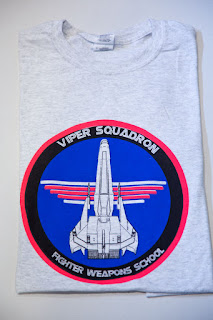 Here is our con report for Collectormania23 - We had a stall, trading at this event.

Gosh, where to start? To get the negatives out of the way first, from a certain perspective this event was a disaster, the worst con of the year so far, and the worst we've been to for a while. It was too cramped with too little space, the dealers tables were too close together with the aisles too narrow for any kind of flow of 'traffic' whilst allowing people to look at the stalls. Signage was completely inadequate (seems to be a common problem for most events) and a lot of what was originally advertised for this event failed to materialise (e.g. the retro gaming zone) - Conditions in the stadium concourse were not particularly pleasant, even when crowded it was rather on the cold side, whereas the 'tent' was far too hot and humid, and both visitors and stall holders were left paddling in pools and rivers of water on the Saturday. Parking is almost always an issue at this event but was even worse than usual with huge areas of the car park being 'out of use' - The entrance to the event was not in the usual place but not signposted and precious little info was given out about any of the changes beforehand.

The Saturday in particular was incredibly unpleasant and lots of people gave up and went home, many more reading people's complaints about the Saturday didn't bother coming at all on the Sunday.

Many traders had a particularly bad weekend compared to this event usually.

So, what went wrong? - All of the above problems were caused by one single issue, the 'Venue' essentially stitching up Showmasters by double booking the main Arena where the event is now usually held. This was done at such short notice that Showmasters had an almost impossible decision. They could cancel the event, or put it on as best they good in what they knew would be far from ideal conditions. The fact the event happened at all is only down to some incredible hard work by the Showmasters team trying to make the best of a bad situation. There were always going to be issues for many whatever decision they took. So the event went ahead, the dealers were 'stitched up' in that they didn't get what they had booked and paid for, those in the tent had to contend with flooding and a much reduced footfall compared to those on the concourse, those on the concourse had to contend with chilly temperatures and overcrowding. The much heralded 'cosplay stage' was cramped and in a far from ideal location and the gaming zones vanished all together so the 'visitor' was also rather short changed, especially as the reasoning behind charging an early entry fee this year was to enable the show to be 'bigger and better'.

Having said that, the event was still a lot of fun for many, signings and photoshoots went reasonably smoothly as they tend to do so at this event, there were plenty of amazing cosplayers as usual, though it has to be said not as many this year as previous years, I suspect the weather had a little to do with that, and, by and large, there is still a fun, family friendly atmosphere.

Personally, despite the appalling Saturday, I still largely enjoyed myself, it's always great to catch up with con friends, other dealers, cosplayers etc. and to make plenty of new friends as well, so given the almost impossible situation they found themselves in I think Showmasters have to be commended for putting on any kind of event at all, let alone an event which most people still enjoyed, even if not as much as would be the case for this event usually.

They do though need to look at the contracts for the Venue booking, they must have been aware that they occupy a 'lower priority' than big corporate clients so being 'bumped' from the venue at short notice must always have been a possibility, though it was very late notice they could have communicated the changes better, I didn't see any kind of statement either on their facebook page, facebook event page, or their own website or forums, it would have been useful to let people know that certain elements would be missing (the gaming zones) and that the layout would be drastically different from planned, then ensure that there is suitable signage so that people know where they need to go - there was some improvement in this between the Saturday and Sunday so they did recognise there was an issue (or responded to complaints) - I do have to say that I've always found Showmasters more willing to take and recognise criticism and I do know that they were genuinely horrifed at the situation they found themselves in and will take on board all complaints, they will themselves look at where they succeeded (e.g. in putting on any kind of event at all) and where they perhaps might have been able to do things better (in fairness, not much given the very late notice of all the changes)

It would be a shame for Collectormania to end because a suitable venue isn't available but the size it is now, let alone having space to grow, limits the possibilities, I can't think of anywhere else it could be held so I would think that the best that can be hoped for is for future contracts with the Venue to be more robust to limit or remove the possibility of such a thing happening again.

So, in summary, some very obvious negatives:

The 'venue' as used on the weekend simply wasn't suitable, I'm not sure why the whole of the concourse wasn't used, nor why the hotel exhibition/conference areas weren't available but I'm sure SM would have used these areas were it possible to do so.

Given the changes, there was inadequate signage, SM did recognise this and did what they could but this could have been better planned, even with the late notice changes.

Communication, given the changes, although at very late notice, the facts could have been presented in any number of ways, facebook, website, forum, twitter etc. so people would have had more of an idea what was happening, yes there is a danger that doing so would lead to people not bothering going but I think people prefer honesty - though I do appreciate that certain details would not have been available in time, some information could have been given out.

The weather - of course not even Showmasters can control this.

Perhaps Showmasters should have suspended the early entry charge, refunding those who had paid given that the event that took place was some way short of the one that happened.

Unfortunately the conditions inside the tent (very damp and humid)  coupled with the fact that I was on my own on our stall for large periods meant that I haven't taken my any event/cosplay pics on this occasion but there are plenty of great pics being posted on the facebook event page.

Lastly I'd like to thank everyone who still made the effort to brave the tent and come and visit our stall - we always appreciate and enjoy talking to people, especially those who enjoy what we do, it helps keep us sane, an especially big thank you to everyone who likes what we do so much that they found something that they wanted to buy - that makes us particularly happy and enables us to attend other events. Next up is London Film and Comic Con in a few weeks - hope to see many of you there :)

It's only a few days to Collectormania and the full unveiling of our initial t-shirt range. We've been working very hard on creating designs and then printing the shirts so that we have, what we hope, will be a good initial selection of designs. We hope that we'll have something for everyone.

After the weekend we'll be overhauling our web store and all our designs will then be available online (stock allowing) though it may take a few days after Collectormania to get ourselves sorted.

We started out creating and printing simple designs but have now graduated to multi colour and complex designs as we have become confident in the materials and processes we are using. We have chosen to use an eco friendly, water based ink process with everything we use being eco/bio-friendly.

We will regularly swap out designs that don't sell and produce new designs, we are literally overflowing with ideas, so even if you don't see something that takes your fancy straight away, keep an eye out because we may soon produce a design you love.

Alongside our t-shirts we'll also have our usual selection of goodies from the wonderful House of Wonderland, our cosplay and pin up prints and assorted other goodies (at Collectormania we'll have some movie prints and posters, at LFCC some retro comics/magazines).

We also love chatting and seeing everyone's cosplays so please look out for our stall and come and say hi - as soon as we know where we are located we'll post on our fb page/twitter.

We'll put up a full con report and selection of pics after the event as usual.

Lots still to do, but getting excited :)